The mission of the Apollo program was to perform a crewed lunar landing. The first four flights, including Apollo 10, tested the equipment used to ultimately place humans on the lunar surface.

The first Apollo flight happened in 1968. The first Moon landing took place in 1969. The last Moon landing was in 1972. A total of twelve humans walked on the Moon as a result of the Apollo program. The astronauts conducted scientific research, studied the lunar surface and collected Moon rocks to bring back to Earth.

Per NASA: “The primary objective of Apollo 11 was to complete a national goal set by President John F. Kennedy on May 25, 1961: perform a crewed lunar landing and return to Earth.

Additional flight objectives included scientific exploration by the lunar module, or LM, crew; deployment of a television camera to transmit signals to Earth; and deployment of a solar wind composition experiment, seismic experiment package and a Laser Ranging Retroreflector.

During the exploration, the two astronauts were to gather samples of lunar-surface materials for return to Earth. They also were to extensively photograph the lunar terrain, the deployed scientific equipment, the LM spacecraft, and each other, both with still and motion picture cameras. This was to be the last Apollo mission to fly a “free-return” trajectory, which would enable a return to Earth with no engine firing, providing a ready abort of the mission at any time prior to lunar orbit insertion.”

The Apollo 11 site contain the bootprints of the first human steps ever taken on another celestrial body besides Earth. Astronauts Neil Armstrong and Edwin “Buzz” Aldrin left a number of items on the site including a disc with messages of peace from the leaders of 74 Earth nations. Astronaut Michael Collins was the Command Module pilot and orbited the Moon while Aldrin and Armstrong were on its surface.

Per the Smithsonian Air and Space Museum, the lunar module had two stages:

1. A silver-and-black ascent stage, containing the crew’s pressurized compartment and the clusters of rockets that controlled the spacecraft.

A commemorative plaque is affixed to the ladder on the descent stage of the Apollo 11 Lunar Landing Module. Each of the Apollo lunar landing missions included a similar plaque. The plaque is stainless steel and measures 22.9 by 19.4 centimeters. The plaque bears the inscription: “Here men from the planet Earth first set foot upon the moon, July 1969 A.D. We came in peace for all mankind.” It also bears the signatures of astronauts Neil Armstrong, Edwin”Buzz” Aldrin, Michael Collins and United States President Richard Nixon. Pictures of the two hemispheres of Earth are also depicted on the plaque.

A small silicon disc carrying messages of goodwill from leaders of 74 countries around the world was left on the Moon by the Apollo 11 astronauts. Each message – some handwritten, others typed – was reduced 200 times to a size much smaller than the head of a pin and appears on the disc as a barely visible dot. The disc remains on the lunar surface, protected within an aluminum capsule.

There were strict limits on the weight of materials that could be loaded into the lunar module and returned to Earth. On Apollo 11 and 12 a heavier scale was used, replaced on later missions by a more compact device.

Combination scoop-and-tong for obtaining small samples of soil and rocks. 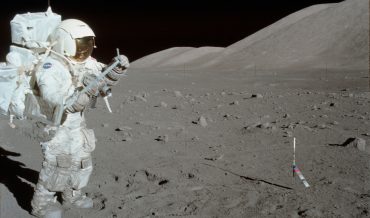 Apollo 17: Crewed Lunar Landing
Scientific objectives of the Apollo 17 mission included, geological surveying and sampling of materials and surface features in a preselected area of the Taurus-Littrow region; deploying and activating surface experiments; and conducting in-flight experiments and photographic tasks during lunar orbit and transearth coast. 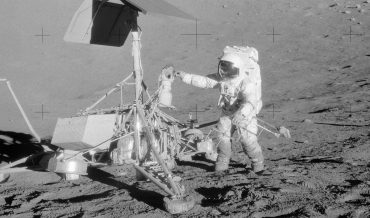 Apollo 12: Crewed Lunar Landing
The primary mission objectives of the second crewed lunar landing included an extensive series of lunar exploration tasks by the lunar module, or LM, crew, as well as the deployment of the Apollo Lunar Surface Experiments Package, or ALSEP, which was to be left on the moon's surface to gather 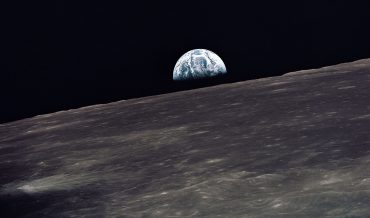